An initial desktop version of Spanish Word Searches is now available. This should definitely be considered a test version and updates will be released shortly!

The app is based on Spanish Word Searches for iPad, which is a complete product available for iPad from the App Store.
Publicado por Neil Coffey en 12:22 No hay comentarios: 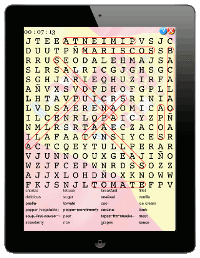 Start the New Year by reinforcing your Spanish vocab with this new iPad app! Spanish Word Searches for iPad was released to the App Store today!

As with its sister app, French Word Searches (also for iPad), the app allows you to take advantage of the full iPad screen size to play Spanish Word Searches according to your chosen topics and difficulty level.

The 1,400 items of basic Spanish vocabulary included in the app are divided into 20 topics and you can play word searches with any combination of topics. As with its French counterpart, the app allows you to choose whether you play with "simple" word searches (in which words run only across or down, and only forwards) or whether words are also allowed to run backwards and/or diagonally.

A new feature added to this Spanish version of the word searches app is that vocabulary is automatically updated over the network when new versions are released. (New words will be added over time, and users' feedback and suggestions are always welcome!)

To celebrate the launch, Spanish Word Searches is currently available half price. Take advantage and grab your copy by clicking the link above or directly from your iPad by searching for "Spanish Word Searches" in the App Store.
Publicado por Neil Coffey en 11:31 No hay comentarios:

Following the server move over the weekend, the site's Spanish dictionary has been updated to include the latest additions and corrections. This update also fixes a problem whereby a few entries were previously not appearing.
Publicado por Neil Coffey en 19:19 No hay comentarios:

Español-Inglés moving to a new server

The Español-Inglés site today moves to a new upgraded server. As the move is finalised, there will surely be some gremlins which will be ironed out over the next few days.

The move has been deliberately timed to conincide with when most people should be sipping cava rather than doing Spanish translation and homework, but for those who are accessing the site over these next few days, thank you for your patience!
Publicado por Neil Coffey en 13:32 No hay comentarios: